Exploring spirituality somewhere between the Emerald Isle and the Black Land....

A little while ago, I read this awesome blog post about Kemetic priesthood in antiquity as well as today. I enjoyed it so much that today I'm going to try to answer a couple of questions that Devo posed. (And if you must know why it took me almost two weeks to do so, the answer is simple: I'm lazy. Deal with it.)

"What is your take on priesthood then..."

I can't say that I am very familiar with the subject, but the most striking aspect of the priesthood of ancient Egypt are the rituals. They are fascinating in their intricacy, artistic even, and the level of commitment required to perform those rites every day for months on end is astonishing (not to mention intimidating). Yet that could only be accomplished because, as Devo pointed out, priesthood then was a job. The temples, as well as the culture itself, supported priests during their service, and that is certainly not the case today. It makes me wonder if those rituals could ever truly be revived as a part of a modern priest's daily practice.

With the exception of Kemetic Orthodoxy, Kemetic priesthood is largely fractured and undefined. Individual temples may have their own requirements for priesthood, but the subject becomes a bit confusing when we talk about independent practitioners. Someone who is devoted to learning about the religion as it was practiced, the myths, and the gods, and has made a serious commitment to serving them is as good as a priest to me. I suppose what we get then is a collection of unaffiliated practitioners, many of whom act as their own priest, whether or not they claim that title for themselves.

"What do you think the modern Kemetic community needs from its priesthood, if anything?"

A few things. One is to be educated. For the priest in question to really know his or her stuff. Kemeticism is specific to a time and culture, and learning about that culture is key to understanding the religion and its rituals, and how to best adapt them for modern practices. A myth or ritual action might not make sense on the surface, but once you put it in the context of it's culture, a new understanding and appreciation can be gained. Egypt's ancient religion survived for thousands of years and left us no shortage of information to work with. (Some people might disagree with me on that point, but after studying Celtic religion, learning about the religion of a culture that actually wrote stuff down leaves a wealth of information by comparison.) I'm not saying that recon is the way to go for everyone, but knowing where the religion comes from and why it's practices were valid to its people are vital to creating viable religion that is meaningful to our own time.

Another important thing for our priesthood is to have a presence in Kemetic and Pagan communities. I don't mean to say that everyone who is a priest needs to constantly be available to give counsel and teach. That may be a focus for some people, and is an invaluable service, but for many, it would be enough to simply maintain a blog or peruse various Kemetic groups online or off. The knowledge and experience that priests gain is invaluable (especially considering the misconceptions that can be found), and needs to be shared with other Kemetics to ensure a richer, healthier religion and community. It also provides opportunities to be recognized by someone who may be looking for Kemeticism, and the chance to share any information they may need. And of course, there's the fact that getting out there and being seen ensures that we are understood by the Pagan community at large.

And then there's devotion, which in my opinion, is the most important part. The word for priest was hem-netjer, meaning "servant of god." The gods of Kemet were central to its religious practice, and this should be mirrored in the religion today. As I mentioned before, I doubt that the rituals could be practiced daily in the manner that they once were, given the state of modern Kemeticism. Many of us have jobs and family, or any number of other obligations, and I don't think any temples will be able to support full-time priesthood any time soon. But regular devotions can easily be practiced on a smaller scale, and should be done so by anyone wanting to call themselves a priest. Priesthood was about serving the gods, and that theme from antiquity remains as relevant today as it was then. 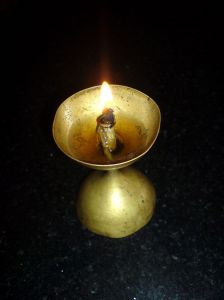 Posted by Unknown at 11:29 AM
Email ThisBlogThis!Share to TwitterShare to FacebookShare to Pinterest
Labels: ancient Egypt, Kemetic, priesthood